Selecting an appropriate medium is a crucial step to develop an ALI culture with a long-lasting barrier function. We provide the tools for a reliable epithelial barrier formation.

Epithelial cell barrier formation can be quantitatively measured using transepithelial electrical resistance (TEER) with a voltohmmeter. To establish ALI-cultures using our Air-Liquid Interface (ALI-Airway) Medium, cells need to seed on collagen type I coated Transwell® inserts and be allowed to grow to 100% confluence in our Airway Epithelial Cell Growth Medium in a liquid-covered culture.

Seeding of cells in early passage is best, with passage 3 giving optimal results. After reaching confluence, the medium should be switched to the ALI-Airway Medium and cells in the inserts should be exposed to air (airlift). Cells will then be stimulated by the effects of airlift and the ALI-Airway Medium to develop many tight junctions to form a selective barrier on the porous membrane of the insert.

To monitor barrier formation in real time the voltohmmeter with STX2 Chopstick® electrode set can be used without damaging the cells (e.g. World Precision Instruments®). From day 3 to 4 post-airlift epithelial barrier formation is significantly better in our ALI-Airway Medium compared to competitor 1 and competitor 2, as indicated by TEER-values. The early establishment of barrier integrity makes it easy to use this pulmonary model quickly without waiting for a complete differentiation.

In the first week of ALI-culture you can achieve guaranteed TEER values > 100 Ω*cm2 with our ALI-Airway Medium. For some ALI pre-screened HBEpC donors, as shown in the graph, the values even tend to be over > 1000 Ω*cm2. TEER values > 100 Ω*cm2 have been shown to be physiological relevant in rabbit airway epithelium [1]. Other commercially available ALI-media tend to decline in their TEER-values after one week of ALI-culture. Instead of a decline of TEER-vales after the first week in ALI-culture our ALI-Airway Medium maintains the level of barrier formation.

In the second week of airlift we guarantee TEER values > 500 Ω*cm2. These TEER values are typically for HBEpC and can also be found in the literature in a range of 700 – 3.200 Ω*cm2 [2][3][4]. Even in week 3 and 4 after starting the ALI-culture barrier integrity will not decline under a threshold of > 500 Ω*cm2. Optimal barrier integrity with a high degree of viable cells (> 70% viability) will be available for at least four weeks. The choice of the right ALI-medium is therefore essential for successful ALI-cultures.

The use of minimal or complex ALI-media have a large impact on the curve progression of TEER values [5][6][7]. Other variations in TEER-values depend on the donor of the cell [8], the passage number of the cells, the right point of airlift with 100% confluent cells [9] and the temperature during TEER measurements [10]. Physiological temperature (37°C) of the ALI-culture is recommended during TEER measurements. Rapid handling during measurements can reduce heat loss. Our ALI-Airway system minimizes variations and guarantees robust and reliable TEER-values over period of 4 weeks. 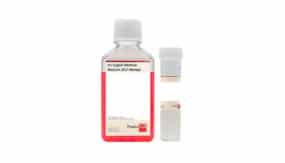 Please give us your contact details. One of our scientific specialists will get in touch to handle your request.