Skin is the primary focus of cosmetic research. Since the European Union banned animal testing of cosmetics completely in 2013, three-dimensional skin models have been used to evaluate epidermal and dermal responses to cosmetic formulations. Such models provide a reliable tool to assess the functionality and safety of new cosmetic products.

The prologue for the development of sophisticated 3D skin models that are used by cosmetic researchers worldwide started more than 80 years ago. In 1933, a “new and improved eyebrow and lash dye” named Lash Lure was introduced to the market in the United States, perfectly reflecting the new trend in the American society of wearing more visible makeup. At that time, nobody thought that an apparently harmless cosmetic product could have severe and even deadly consequences. Yet, Lash Lure contained paraphenylenediamine, an untested chemical compound that can cause severe reactions on the face, eyelids, and eyes (McCalley et al., 1933). More than a dozen women were blinded, and one woman developed a deadly bacterial infection after applying the dye. The public outcry led the Roosevelt administration to give the U. S. Food and Drug Administration (FDA) authority over cosmetics. In 1938, the U. S. Congress passed the Federal Food, Drug, and Cosmetic Act , which requires stricter regulations for cosmetic products. Since then, cosmetic testing has become an integral part of product development in the cosmetic industry.

The use of animal models for testing purposes was common throughout the 20th century. However, growing public concern about the fate of laboratory animals, as well as ethical and scientific considerations (Ferdowsian et al., 2015) prompted lawmakers in Europe to strictly regulate and eventually ban the use of animals for testing cosmetics. Since the 1990s, restrictions on animal testing have become more stringent. In 2013, the European Union’s full ban on animal testing of finished cosmetics and their ingredients, and the sale of such products, came into force. Bans have also been enacted in dozens of other countries. In markets that still allow animal testing of cosmetics, such as the U.S., its use is declining as consumers are becoming increasingly critical.

Faced with such concerns, the cosmetic industry is developing new testing methods. “We need alternatives to animal models,” explains Dr. Anja Krattenmacher, a postdoctoral scientist in the sector for performance materials at Merck, which specializes in healthcare, life sciences and performance materials. “Besides ethical considerations, it is also important to highlight that animal skin differs from human skin and these anatomical differences might influence product absorption and penetration.” Krattenmacher and her team are using 3D skin models to test anti-aging and anti-inflammatory properties of cosmetics.

Human skin equivalents have been successfully generated in vitro in the last two decades, mainly by using keratinocytes cultured on a dermal substitute. “Our 3D skin models are built with fibroblasts and keratinocytes. Fibroblasts are embedded in an extracellular matrix and mirror the dermis. Keratinocytes then build the epidermis. These models are exposed to the air to induce cell differentiation,” explains Krattenmacher. “The process takes 10 to 14 days. After cell differentiation, we can keep the constructs in culture for one to two weeks while performing our tests.” Krattenmacher uses primary cells from PromoCell. “We need fresh donor cells. We cannot use cell lines that have been kept in culture for extended periods, as the cells are not pristine and not suitable for our model.”

Three-dimensional skin equivalents resemble the architecture of the human skin tissue, and they offer a much better testing platform than two-dimensional cell culture (Read our blog post on another application of 3D skin models). When testing of the cells’ reactions to chemical compounds, every cell in a monolayer comes in direct contact with substances. As a result, the concentrations that induce irritations in monolayer cell tests might substantially differ from the in vivo situations (Brohem et al., 2011). Moreover, many studies have compared cells grown under 2D or 3D conditions. Such cells reveal significant differences in phenotype, cellular signaling, cell migration, and drug responses (Mazzoleni et al., 2009). “In a 3D tissue-like skin model, cosmetics are not absorbed homogeneously in all areas and not every cell can interact directly with them,” explains Krattenmacher. “Cellular responses in 3D models are therefore more similar to the in vivo situation.”

Skin aging is a complex biological process influenced by various intrinsic and extrinsic factors that cause changes in the skin architecture, particularly on areas exposed to the sun (Ganceviciene et al., 2012). Reducing the visible effects of aging is one of the primary objectives of the cosmetic industry. Three structural components of the dermis – collagen, elastin, and glycosaminoglycans – have been the subjects of the majority of anti-aging research efforts (Baumann, 2007). In particular, a reduced content of collagen weakens the bond between dermis and epidermis and contributes to the formation of wrinkles (Content-Audeonneau et al., 1999). “We treat the cells in the 3D model with anti-aging compounds over several days, and observe whether the fibroblasts in the extracellular matrix produce more collagen than non-treated fibroblasts. This could induce an anti-aging effect of filling up the collagen, which becomes fragile during aging processes,” remarks Krattenmacher.

Inflammatory processes can also considerably accelerate skin aging, and the development of novel compounds with anti-inflammatory properties is currently a major area of development (Fuller, 2015). “In order to test new compounds, an inflammation first has to be induced in the skin model using irritants,” explains Krattenmacher. “Then we apply the anti-inflammatory substance and observe whether we can see a reduction of the epidermal swelling, which is a typical sign of inflammation. Moreover, we can measure reduction of inflammatory interleukin levels with immunohistochemistry, or ELISAs. Finally, we can isolate RNA and proteins, and analyze their expression with real-time PCRs.”

Such applications show how 3D skin equivalents have become an essential tool in cosmetic research and are widely used to test efficacy and toxicity of new formulations. “Three-dimensional skin models have great potential,” concludes Krattenmacher. “Results are reproducible and can be often translated to humans, which lowers the need for animal testing of cosmetics while giving fundamental insights into cellular interactions within tissue-like structures. These models will play an important role not only for the cosmetic industry, but also in medical research.” 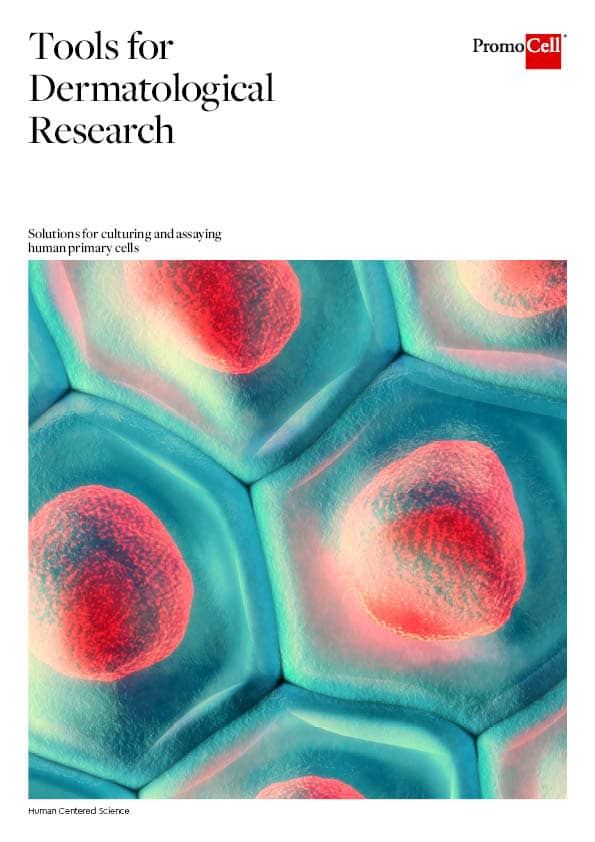 Cells of the human skin

The skin is made up of various cell types. Our products range from follicle dermal papilla cells to fibroblasts, keratinocytes, melanocytes and human white preadipocytes. Get an overview of our products in our brochure

Antibiotics are routinely used in cell cultures to prevent bacterial infections. But there are side effects: Studies show that they impair cell growth and differentiation. With good laboratory practice, the use of antibiotics is unnecessary.

A cell culture is a world of its own. The culture dish contains nutrients within the media that cells need to thrive and prosper….