Covid-19 News
PromoCell’s facility remains operational and we continue to support researchers worldwide. We are proud of making a contribution to the fight against SARS-CoV-2 with our products. We are here to help - contact us. Dismiss

Macrophages are tissue-resident professional phagocytes and antigen-presenting cells (APC), that form as a result of the differentiation of circulating peripheral blood monocytes. They perform active and regulatory immune functions in both innate and adaptive immunity [1], e.g. by clearing bacterial infections from open wounds. Macrophages influence the outcome of many diseases, e.g. allergic and autoimmune disorders, cancer, diabetes, atherosclerosis, rheumatoid arthritis and metabolic syndrome [2]. 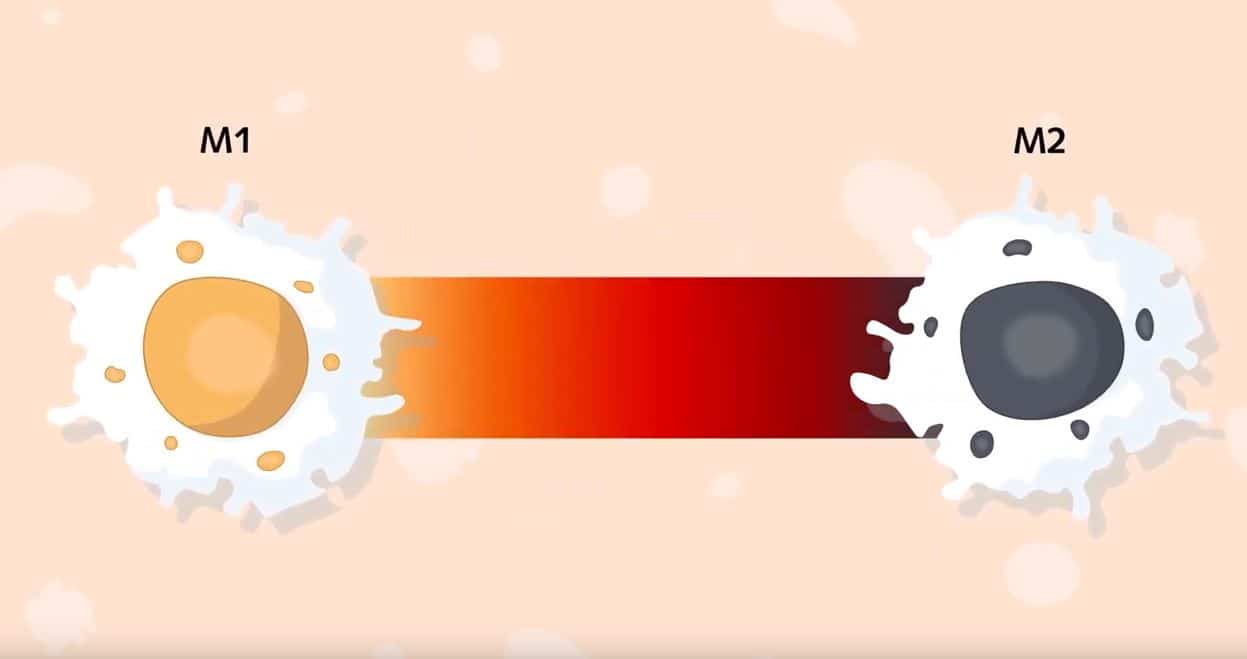 Traditionally, activated macrophages of different phenotypes have routinely been classified as M1 and M2 macrophages. The “classically activated” M1 macrophages comprise immune effector cells of an acutely inflammatory phenotype. They are highly aggressive against bacteria and produce large amounts of lymphokines [3]. Conversely, the “alternatively activated” anti-inflammatory M2 macrophages perform regulatory functions of many kinds including regulating immunity, maintaining tolerance, and tissue repair/wound healing [1, 3].
Due to this functional heterogeneity of M2 macrophage functions, they have been assigned to three subgroups, M2a, M2b and M2c.
In fact, cells of the monocyte/macrophage lineage exhibit extraordinary plasticity in response to both endogenous and exogenous stimuli, potentially even reversing the initial M1/M2 polarization processes [3]. For example, M2 polarized macrophages can convert to M1-activated status under certain conditions. 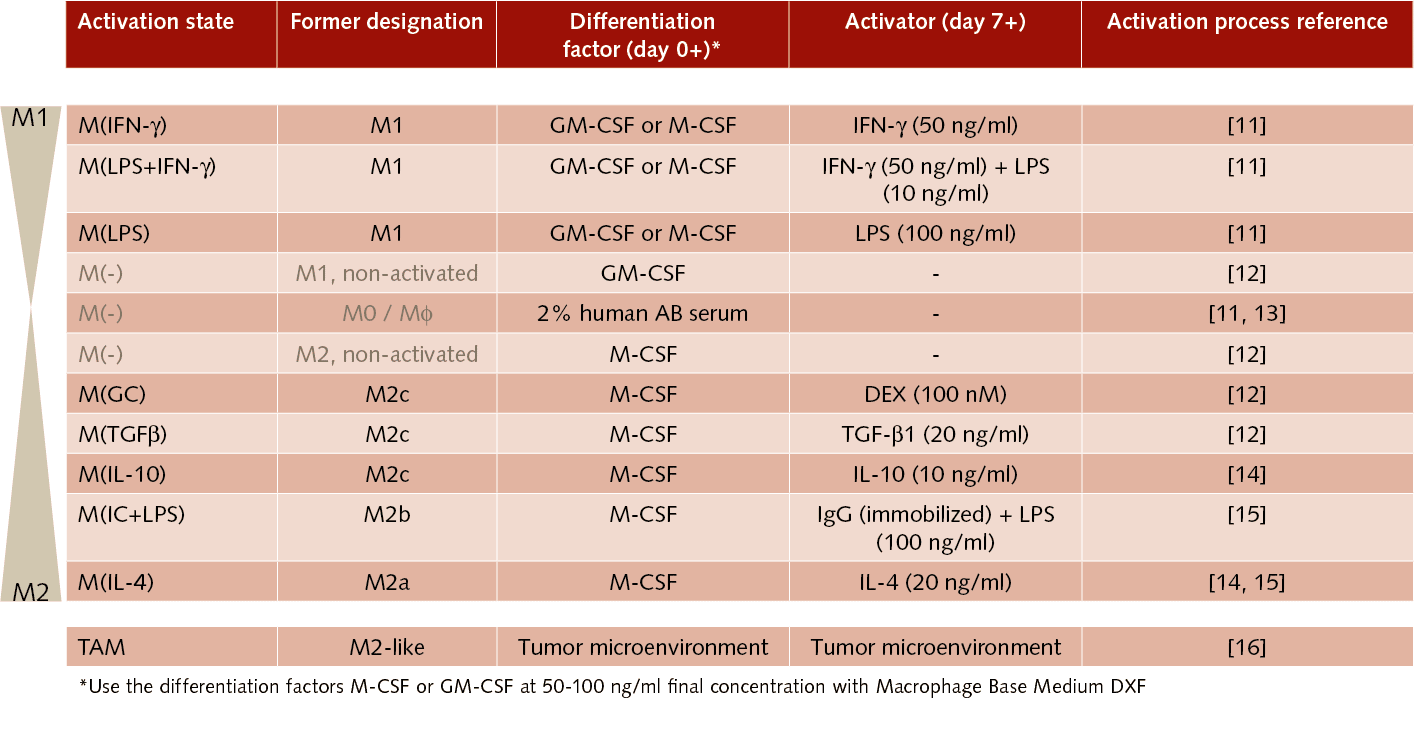 Defined, xeno-free macrophage culture systems, in conjunction with the published guidelines for unified experimental standards for in vitro macrophage activation, are essential for making purposeful and effective progress in macrophage-related research.

Primary human macrophages are difficult to isolate in sufficient amounts from tissue and do not proliferate in culture. In addition, it is commonly accepted that the obtained cells often exhibit significant phenotypical heterogeneity. MDM provide an excellent alternative, since human blood monocytes are readily available in large numbers and can be differentiated into macrophages in vitro.

A commonly accepted marker profile for M1 macrophages is CD68+/CD80+, whereas M2-macrophages are characterized as CD68+/CD163+ [7]. In vitro differentiation of monocytes in the presence of the M1-Macrophage Generation Medium DXF (C-28055, contains GM-CSF) leads to macrophages exhibiting a CD68+/CD80+/CD163-/low M1-like polarized phenotype, whilst the M2-Macrophage Generation Medium DXF (C-28056, contains M-CSF) promotes M2-like polarized CD68+/CD80-/low/CD163+ macrophages. The Macrophage Base Medium DXF (C-28057) represents the user-customizable version of this new product line. It comes without cytokines and therefore needs appropriate supplementation by the user.
If required, customized activation and subtype-specific polarization of the M1/M2-polarized macrophages may be performed by the user. Indeed, macrophage activation may elicit an altered expression pattern of certain markers as compared to non-activated cells [8].

Macrophages are present in almost all tissues and their classic role as antimicrobial phagocytes is well-known. They contribute to various processes in the healthy organism, including development, wound healing, infection and tissue homeostasis. Tissue-resident macrophages play important roles in development and also perform homeostatic and inflammatory functions such as regulating angiogenesis and removing apoptotic cells as secretions of inflammatory mediators [6]. The standard binary classification system (with M1 and M2 macrophages) is becoming outdated, however. Now attention is increasingly turning to the incredibly diverse set of functional phenotypes that are influenced by and highly adaptive to environmental stimuli. 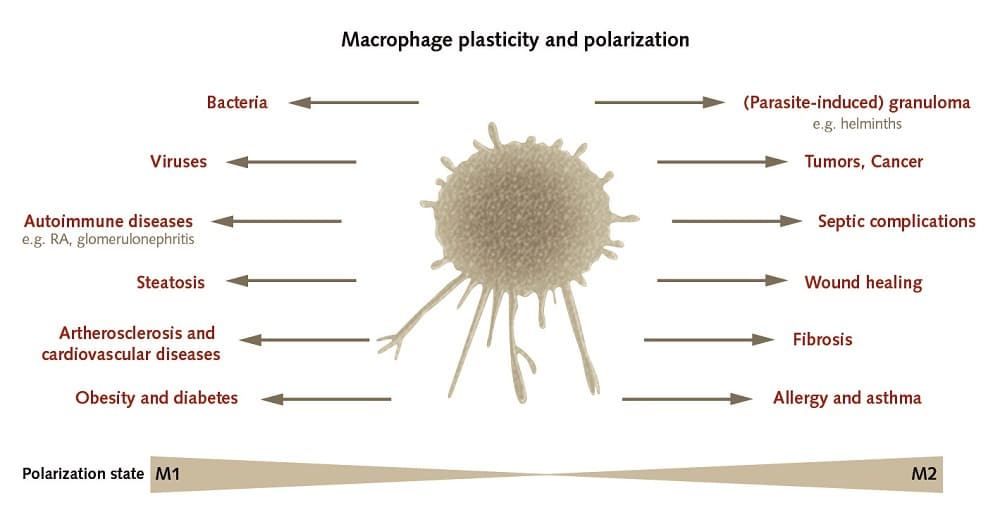 When something goes wrong in an organism and pathologies develop, macrophages probably play a role in the establishment of various kinds of diseases such as autoimmune disorders, atherosclerosis and cancer. During the early phases, macrophages usually manifest as a pro-inflammatory phenotype and later switch to an anti-inflammatory state. Unless this initially helpful inflammatory reaction is controlled, the macrophages become pathogenic, cause tissue damage and contribute to the progression of inflammatory or autoimmune diseases, among others [2]. In cancers as well, there is a strong correlation between macrophage density and the macrophage transcriptional signature on the one hand and the survival rate of cancer patients on the other [6]. An understanding of the mechanisms by which a macrophage switches between inflammatory and anti-inflammatory phenotypes may play an important role in elucidating the underlying pathologies of many chronic diseases [2].

The role that macrophages play in tumors and cancer is controversial. Results have demonstrated that macrophages can either support or hinder tumorigenesis. In general, it appears that M1 macrophage subsets tend to manifest as pro-inflammatory, cytotoxic and anti-tumorigenic phenotypes, while M2 macrophage subsets assume an anti-inflammatory and pro-tumorigenic state [9].
Tumor-associated macrophages (TAMs) are therefore closer to the M2 subsets. TAMs also appear to exhibit an enormous diversity of subtypes, and the older binary nomenclature is therefore also rapidly becoming obsolete here as well [9]. Recent experiments with TAMs as potential targets for cancer treatment have yielded promising results, e.g. by limiting monocyte recruitment, modulating TAM activation, reprogramming TAMs and using them as drug carriers [10].

Macrophage Plasticity is More Than Black and WhitePromoCells in Space – Ready For Lift-OffMacrophages: The High-Flyers of Biomedical Research

PromoCell uses cookies to provide you with the best possible service. Find out more.