Many rules in biology exist, and even more exceptions to these rules. For years, immunologists have tried to classify macrophages into two subtypes, classically activated M1, and alternatively activated M2 macrophages. However, with the growing number of activated macrophage subtypes needing description, established nomenclature falls short. Researchers are seeking an alternative to the traditional black-and-white principle.

“Like the biblical Tower of Babel, macrophage activation encompasses a panoply of descriptors used in different ways,” writes Dr. Peter J. Murray, a cell researcher at St. Jude’s Children’s Hospital in Memphis, Tennessee, in a 2014 article on macrophage nomenclature. In the biblical story, the confusion of tongues stops the project of building a tower that reaches heaven. To prevent that outcome in macrophage research, Murray recommends adopting a common nomenclature, as well as universal experimental guidelines. Standardization and comparable research results are prerequisites for therapeutic approaches targeting macrophages in diseases such as cancer, atherosclerosis, or certain autoimmune disorders.

The challenge: Vast diversity and plasticity are outstanding hallmarks of macrophages, and result in a heterogeneous population of functionally diverse cells with different origins. Tissue-resident macrophages are strategically located throughout the body in the bones (osteoclasts), lungs (alveolar macrophages), liver (Kupffer cells), gut, brain (microglia), connective tissues (histiocytes), eyes, and lymphoid organs (Murray et al., 2011). They play crucial roles in immunity to pathogens, tissue development and repair, as well as homeostasis. They can also rapidly change their phenotype in response to variations in their environment.

However, it is precisely their multiplicity that causes major problems for researchers trying to communicate with each other so they can further expand their knowledge. “We sense a general discontent in the community of myeloid cell experts and in the literature,” explains Dr. Hagen Wieland from the development department at PromoCell. “It is therefore important to name the cells in a way that allows reproduction and standardization of experiments.”

Macrophage polarization is a dynamic process

Researchers have tried to classify macrophages based either on their belonging to the mononuclear phagocytic system, their origin, or their functional phenotype. In the early 1990s, Michael Stein and colleagues described the different effects of interleukin-4 (IL-4) compared to interferon gamma (IFN-γ) and/or lipopolysaccharide (LPS) on the activation phenotype of macrophages. The term “alternative activation” was created to describe IL-4 -stimulated macrophages, and to distinguish them from “classical activation” of IFN-γ /LPS -stimulated macrophages.

Several years later, the M1 (classically activated) – M2 (alternatively activated) model was introduced to describe the two different macrophage responses, reflecting the T-helper cells nomenclature (Mills et al., 2000). M1 macrophages were described as having inflammatory functions, and were crucial for the resistance to pathogens and their elimination. M2 macrophages had anti-inflammatory functions, and were important for maintaining tissue integrity.

“The limitations of the M1/M2 model for defining macrophage polarization are becoming more and more clear, as these two terms identify extremes of a continuum that do not occur in vivo,” remarks Wieland. Macrophages exist usually between M1 and M2 as the polarization process is dynamic, and cells often display characteristics of both states at the same time.

To move away from a nomenclature based on the bidirectional polarization, to one based on a spectrum of intermediate activation states, a set of M2-like stages (M2a, M2b, M2c, M2d) was added (Biswas and Mantovani, 2010). “M1 or M2 macrophages can be activated, and this activation can influence their polarization state,” explains Wieland. “Polarization is not fixed, and there are so many intermediate stages that cannot be accurately described with the M1/M2 model.” For instance, M2-polarized macrophages can be activated and adopt an M1-like phenotype, and vice versa. This process, called re-education, is stronger than polarization, and it is crucial in vivo where the cells need to adapt to an ever-changing environment.

In the case of a trauma – when the skin barrier is breached, for example – M1 macrophages are needed to mount an inflammatory reaction and get rid of the invading bacteria. When the inflammation fades away, macrophages are re-educated toward an M2-like phenotype and begin tissue regeneration. Otherwise, M1 macrophages would start destroying healthy tissue, and impair the healing process.

Recommendations for a uniform nomenclature of macrophages

Various attempts to account for the cells’ plasticity and to classify the macrophages into different subpopulations have resulted in an unclear nomenclature and confusing categorization. This diversity of terminology makes it difficult to describe scientific results clearly, and impedes scientific progress and translational approaches. In the search for a solution to the problem, a group of researchers met at the International Congress of Immunology in Milan in August 2013. There they drafted a macrophage-activation nomenclature and reporting standards for in vitro experiments. The common framework proposal was then published one year later (Murray et al., 2014), and included the following recommendations:

An alternative classification system was published by Guilliams et al., in 2015, and is based on the cellular origin of macrophages. This nomenclature shares three important principles with the system proposed by Peter Murray. Both intend to eliminate terms that imply functional specification, both introduce a fixed level-one system across species and tissues, and both allow flexibility through a level-two system.

“There is still no unanimous acceptance of a standardized nomenclature in the scientific community,” comments Wieland. “And some biologists criticize the straightforwardness of these approaches, pointing out the need for a more complex description of the macrophages’ system. However, PromoCell adheres to the nomenclature of Dr. Murray, as it precisely defines how macrophages are differentiated in vitro, and which cytokines are used for their polarization, as well as subsequent activation. This procedure allows scientists to reproduce and standardize the experimental processes,” says Wieland. “There is a noticeable increase in reviewers and scientists who have adopted Murray’s nomenclature in their works since 2014. This way, they can better present their results.”

A better standardization is crucial for new therapeutic approaches

Different subsets of macrophages are essential to the pathogenesis of many diseases, where they often play opposing roles (Murray et al., 2011). M2-like macrophages regulate important metabolic functions in adipose tissue, maintain insulin sensitivity, and prevent the onset of type 2 diabetes, whereas disease progression is often associated with a switch from M2 to M1 phenotype (Lumeng et al., 2007).

Tissue inflammation is an important feature of cancer biology, and is often linked to a polarization of M1 into M2 macrophages. These promote tumor growth, angiogenesis and metastasis (Joshi et al., 2014). Moreover, M1 macrophage-derived cytokines are important mediators in chronic inflammation, autoimmune diseases, and atherosclerosis.

A more detailed understanding of the mechanisms that regulate the activation of human macrophages is likely to lead to the development of more effective strategies for treating various important inflammatory diseases. “The standardization and reproducibility of macrophage generation in vitro is the starting point for the development of new therapies,” concludes Wieland. “Only when different laboratories are able to generate the same cells in the same way will it be possible to succeed in developing robust strategies to address the multitude of macrophage-related disorders.” This could enable macrophage researchers to succeed at building their tower of Babel, and prevent the failure experienced by the biblical people. 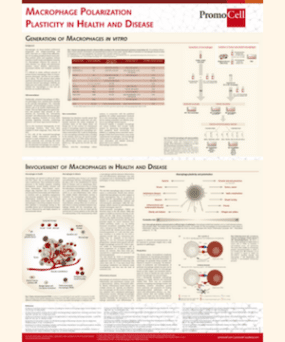 Macrophages are known as the “big eaters” in the human body, and are present in almost all tissues.

Download our poster for practical tips on generating macrophages in vitro, and read more about their role in homeostasis and pathologies.