Three, Two, One, Zero: Two research groups working in space life sciences are investigating the behavior of cells from PromoCell in microgravity on the International Space Station. The launch of a Falcon 9 rocket coupled to a Dragon spacecraft is planned for December 15th in Florida, USA.

Gravity is everywhere on earth, and it has always been here. Life depends on this essential force. But how does gravity affect life on earth, and how is this force integrated into cell metabolism? The answers to such questions might be found in outer space. If you would like to know which aspects of physiology are controlled by gravity, just switch it off. Taking cells along on an intergalactic mission makes this possible.

Two groups of researchers, from IONTOX LLC, a US biotech company, and LaunchPad Medical LLC are working with Bioserve Space Technologies to take human osteoblast cells from PromoCell on a ride to outer space. The moment of truth for both of them is December 15th, 10:36 am Eastern Standard Time. Then the scientists will hear: “3, 2, 1, 0 – Lift-Off.” The journey of a Falcon 9 rocket coupled to a Dragon spacecraft starts at Cape Canaveral Air Force Station in Florida, USA, and leads to the International Space Station (ISS) orbiting roughly 250 miles (400 kilometers) above the earth’s surface.

The logistics company that is delivering the cargo for the experiments to the ISS is SpaceX. And their vehicle is called “Dragon” – a spacecraft with a height of 23.6 feet (7.2 meters) and a diameter of 12 feet (3.7 meters). In the past five years, the company has brought cargo to the ISS, and back to earth as well. The possibility of bringing samples back is an important aspect for scientists who want to study the effects of zero gravity on physiology, because it offers the potential to assess the samples in a lab on earth. “The biggest and most obvious advantage of executing experiments on the ISS is the unique microgravity environment,” says Dr. Jamin Willoughby Sr., Vice President of Toxicology at IONTOX LLC, who is coordinating one of the research efforts on cells in space.

In cooperation with LaunchPad Medical LLC and Bioserve Space Technologies, the IONTOX project will assess osteoblasts from PromoCell in space. Their experiments will last for about a month. “The conditions on the ISS mimic an osteoporosis environment. We want to examine the biocompatibility of the cells with a proprietary bone graft substitute from LaunchPad under those circumstances,” explains Willoughby. Their long-term aim is to promote tissue regeneration, which is necessary for alleviating osteoporosis, as well as for enhancing formation of healthy bone around metallic bone implants, for example.

“As the astronauts on the ISS conduct the experiments, our scientists will perform analogous experiments on earth,” says Willoughby. This means that after a final analysis, researchers can compare the results from the ISS – under osteoporosis-like conditions – with the on-earth results obtained without the osteoporosis environment.

The project by the three companies is based on observations made by and on astronauts in space: A loss of bone density occurs in the microgravity environment. Under these special conditions, many physiological parameters are varied. Cells of the human immune system are particularly sensitive (Thiel et al., 2017).

The immune system is the model of the research group from Professor Oliver Ullrich, chair of Anatomy at the University of Zurich, Switzerland. He has been working in space life sciences for many years and has conducted 17 parabolic flight campaigns, four sounding rocket missions and three orbital missions. One of his most recent projects included experiments on the ISS that were carried out by European Space Agency astronaut Samantha Christoforetti in 2015. Prof. Ullrich and colleagues published their results in 2017, in the Nature open access journal Scientific Reports. They showed that macrophages adapt to microgravity within seconds (Thiel et al., 2017). This could be one explanation why many astronauts do not suffer from negative health effects after long-term missions in space. With their real-time on orbit measurements, Ullrich’s group is the first to show cellular sensitivity to gravity.

On December 15th, Ullrich and his group plan to begin a new chapter of cell culture research in space. This is why they are part of the SpaceX CRS-13 mission, along with IONTOX LLC. For pioneers in life sciences, experiments go beyond blue-sky thinking. They can even include leaving our planet to escape the bonds of gravity. 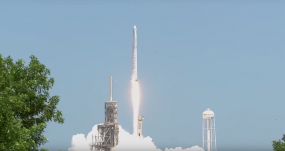 Watch the Launch of the SpaceX-Flight

Enjoy viewing the launch of the SpaceX-flight CRS-13 to the International Space Station. A Falcon 9 rocket that was coupled to a Dragon spacecraft lifted off from Cape Canaveral Air Force Station in Florida, USA, December 15th.

Oxygen has two faces: While it’s a life-saving gas essential for humans and animals, excessive generation of reactive oxygen species damages cells and promotes senescence. This duality is the research focus of Professor Giovanni E. Mann of King’s College London. Prof. Mann and his colleagues are currently investigating redox signaling in vascular cells in culture….