Oxygen has two faces: While it’s a life-saving gas essential for humans and animals, excessive generation of reactive oxygen species damages cells and promotes senescence. This duality is the research focus of Professor Giovanni E. Mann of King’s College London. Prof. Mann and his colleagues are currently investigating redox signaling in vascular cells in culture.

Two linked atoms – essential for survival. Without oxygen, life on earth probably wouldn’t exist. But this gas can be harmful as well – especially radicals, which are highly reactive. Luckily, many cells in our body are never directly exposed to atmospheric oxygen concentrations. “And this is important, because increased free radical generation under atmospheric oxygen levels would stress our cells,” explains Giovanni E. Mann, Professor of Vascular Physiology in the Cardiovascular Division at King´s College London.

Mann has over 30 years of research expertise in the field of free radical biology. His special interest is the physiology of blood vessels. Working with his research group, he employs vascular cell culture to gain insights into the molecular mechanisms regulating cellular antioxidant defenses. Being a mentor of early career investigators, such as PhDs and postdocs, is important to him, and he has supervised 37 young researchers, guiding them along the path to becoming PhDs.

Mann’s research team has recently focused on characterizing the phenotype of vascular endothelial and smooth muscle cells cultured under physiologically relevant oxygen levels to recapitulate their in vivo environment. Many scientists maintain their cultured cells under standard atmospheric oxygen tension of approximately twenty-one percent. Although researchers often refer to that tension as “normoxia,” cells are actually under significant oxidative stress and hence being cultured under “hyperoxia.”

To mimic the in vivo environment, depending on their origin, vascular cells are exposed to oxygen levels ranging between approximately 4 to 13 percent. “So five or six years ago, we decided to set up a system that would enable us to maintain our vascular cells continuously under a defined oxygen tension,” explains Mann. However, to accomplish this requires clearing several hurdles, such as maintaining cells long-term under defined oxygen levels without re-exposing them to room air. Other challenges include the cost of necessary oxygen-controlled workstations for culturing, passaging and experimenting with cells.

But these challenges did not stop Mann and his team. “In science, there are no impossible tasks. There are problems, and for these, you have to come up with solutions.” So he and his team secured Research and Development (R&D) support from six companies to underpin their research into the mechanisms regulating vascular redox signaling under defined oxygen levels. One of the companies is PromoCell from Heidelberg, Germany, which is supplying vascular cells and culture media. Other key companies are Baker-Ruskinn, which is providing highly specialized oxygen-controlled workstations; BMG Labtech, a manufacturer of oxygen-regulated plate readers; and Luxcel Biosciences, which produces phosphorescence sensors to monitor oxygen levels in living cells. This R&D research consortium allows Mann and his group to study cells in culture under defined oxygen levels.

Toxic effects of nanoparticles only under physiological oxygen tension

With the support of this “R&D-consortium,” Mann’s group has established that cells behave very differently in a physiologically normoxic environment compared to experiments conducted under atmospheric oxygen conditions: “They differ in terms of calcium signaling, proliferation and antioxidant gene expression.” Such differences might have significant implications for intracellular signaling pathways. In collaboration with colleagues at the Institute of Pharmaceutical Sciences at King’s College London, they also analyzed the toxicity of nanoparticles in lung epithelial cells cultured long-term under physiological and atmospheric oxygen levels. Notably, nanoparticle toxicity was only observed in cells cultured at physiological oxygen levels largely recapitulating in vivo conditions.

“To a biologist, it’s quite obvious that cells behave differently if they are stressed by oxygen concentrations that are about 4-fold higher than levels encountered under physiological normoxia in vivo,” continues Mann, who received his Bachelor’s degree in Zoology from George Washington University in Washington, D.C., in 1973. Mann entered the field of free radical biology by chance. He was at an international congress in Vienna in 1989, where he met Professor Jose Viña from the Universidad de Valencia, Spain.

“We talked about our research, and then a postdoc from his lab joined my group for a year to investigate the role of redox stress in pancreatitis,” Mann says. Shortly after this meeting, Mann met Professors Shiro Bannai and Tetsuro Ishii from University of Tsukuba, Japan, who were interested in the molecular mechanisms regulating redox signaling in cultured cells. Ishii subsequently joined Mann’s group as a Wellcome Trust funded research visitor. Together they investigated the redox sensitive transcription factor Nrf2 and its importance in regulating endogenous antioxidant defenses against oxidized proteins and lipid peroxidation products.

Overproduction of free radicals has been implicated in cellular aging. Recent evidence highlights that even much lower levels of free radicals actually serve as intracellular signaling molecules to activate Nrf2-regulated antioxidant enzymes. “Our findings that physiological oxygen levels significantly affect the phenotype of cells may shed new light on lifestyle diseases, including cardiovascular, neurodegenerative and metabolic diseases,” says Mann. But there are still a lot of questions to answer. “That´s science – we never completely solve a problem,” he adds. “But we’re gaining the tools to get closer and to formulate further questions.”

Tea in the company of Nobel laureates

After nearly 40 years in science, Mann has witnessed a lot of changes. As an early career researcher in Physiology at University College London, he recalls that scientists spent a considerable time researching the literature in actual libraries in order to carefully plan, conduct and discuss experiments with colleagues: “Completion of a research project was then submitted for peer-reviewed publication, and not only to the journals Science or Nature.” When thinking about memorable moments as a young scientist, he reminisces about the Starling Room at University College London, where PhDs, postdocs and staff, including the Nobel Laureates Sir Bernard Katz and Sir Andrew Huxley, had the opportunity to have tea and discuss research.

At 66-years-old, Mann remains eager to learn and to develop new concepts: “Ideas can come from anywhere. Research questions have been a life-long passion that I’ve had the privilege to enjoy.” 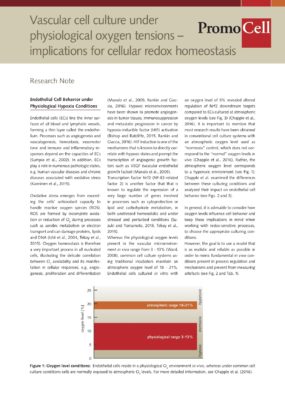 The problem is called: reactive oxygen species (ROS). If the amount of those aggressive molecules exceeds the cells antioxidant capacity, your research subjects are stressed. Find out how you can shift your cell culture conditions and establish physiological conditions.