Cells that feed other cells: The endothelium is a layer of cells that line blood vessels, and it is responsible for many tasks, including the transport of essential nutrients. Human umbilical vein endothelial cells (HUVECs) provide an in-vitro model for studying physiological and pathological processes of the vasculature.

“I’ll never forget the first time I added cancer cells to a HUVECs monolayer and watched them interact. I was fascinated and wanted to know more,” says Dr. Maryam Rezaei, an Iranian postdoc at the Institute of Physiological Chemistry and Pathobiochemistry of the University of Muenster who has been working with human umbilical vein endothelial cells (HUVECs) for the last six years. Her prime motivation arises from a tragic personal experience, when she lost her mother to an incurable disease. Rezaei vowed to “fight not yet-curable diseases.”

Today, Rezaei is studying the interactions between cancer and the nearly ubiquitous endothelial cells. Inside a cancer patient’s body, sooner or later endothelial and cancer cells will “meet” each other. This is a crucial step in disease progression, and particularly important to the nutrient supply of the growing cell mass of a tumor.

To investigate such interactions, Rezaei employs cell culture. Talking about the advantages of having a reliable in vitro cell model for her studies, Dr. Rezaei underlines the versatility of HUVECs. “I can change a lot of factors in vitro and observe the consequences on endothelial and cancer cells. This would be much more difficult in vivo.“ HUVECs represent the most widespread cell type for in vitro studies of the vasculature and angiogenesis.

The vasculature: a complex network that brings fuel to our cells

Bringing the right fuel at the right time to the cells is the primary task of the vasculature, the body’s complex network of blood vessels. Working together, arteries, veins, and capillaries transport fluids, gases, macromolecules, and cells to the different tissues. This means that vascular pathologies, such as inflammatory diseases, cancer, and atherosclerosis are among the most life-threatening diseases, and are the focus of many research efforts.

Endothelial cells build the inner layer of blood and lymphatic vessel, and control the passages of substances and cells between the blood and the neighboring tissues. They represent a heterogenous and plastic population with tissue-specific properties. Researchers once assumed that endothelial cells were inactive, but more recent studies have revealed them to be a population of highly active cells that are closely involved in many physiological processes.

They can change rapidly from a resting condition to a migratory and highly proliferative state in response to growth factors during angiogenesis, which is the formation of new blood vessels from existing ones. However, functional impairment of the endothelium can trigger severe pathologies including cancer, psoriasis, various eye diseases, rheumatoid arthritis, asthma, autoimmune diseases, infectious diseases, coronary arterial diseases, stroke, atherosclerosis, and impaired wound healing, among others (Van Hove et al, 2015; Carmeliet et al. 2000).

The angiogenesis process drives embryonic and fetal development, and plays a pivotal role in organ growth, wound healing, and skeletal development, as well as in the female reproductive cycle. Physiological angiogenesis is a highly organized and tightly regulated process that is influenced by pro- and antiangiogenic factors, including chemokines, integrins, and oxygen sensing factors, depending on different tissue requirements. Endothelial cells are activated by stimulatory agents, and first degrade the basal membrane; they then migrate along a cytokine gradient to the surrounding stroma. There, the cells begin to form tubes and mature into new vessels. Pathological angiogenesis is not as well regulated, and is characteristic of pathological processes in cancer, ischemic and inflammatory diseases. Having a better understanding of the factors involved in angiogenesis will help researchers develop new therapeutic approaches.

Angiogenesis research and the role of HUVECs

One of the main problems performing angiogenesis research is choosing the appropriate assays, and scientists need to select the assay conditions and the cell types that most closely resemble the disease being studied. By combining in vitro and in vivo studies wisely, researchers can facilitate the transition from preclinical to clinical studies (Staton, et al. 2009). Here, HUVECs provide an optimal model system for the study of the regulation of endothelial cells and their response to different stimuli.

PromoCell has specialized in isolating HUVECs for over 25 years. The cells can be obtained from one single donor, three or four pooled donors, as well as from donors pre-screened for VEGF response. “We first used freshly isolated HUVECs,” explains Dr. Rezaei. “However, you might get contamination with fibroblasts. Sometimes it is difficult to have a clean population.” This is why she now uses HUVECs from PromoCell, in batches from three donors. “This makes it easier to reproduce the data, as you can use the same batch. However, to ensure that the results are reliable, we use three different pools.”

To evaluate the influence of different substances on the endothelium, HUVECs can be used in a tube formation assay, which was first described by Kubota et al, in 1988. Cells are plated onto a basement-membrane-like substrate on which they form capillary-like tubules within a short period. Scientist can then screen for various factors that can promote or inhibit angiogenesis.

The tube formation assay offers several advantages: it is easy to set up, relatively inexpensive, fast, flexible, and quantifiable. It is often used to assess the effects of new compounds in oncological research. In cancer, the stimulation of angiogenesis can give tumor cells better access to nutrients and oxygen, and the cancer cells use the vasculature during metastasis to reach distant tissues and organs. Being able to control angiogenesis in cancer could lead to positive therapeutic effects.

The transwell migration assay, first introduced as the Boyden chamber (Boyden et al, 1962 and Chen et al, 2005), measures the ability of endothelial cells to move along a cytokine gradient. Transmigration assays allow researchers to determine the number of cells migrating through a membrane from an upper compartment to a lower compartment where chemotactic agents are present. Another procedure, the invasion assay, analyzes the ability of endothelial cells to move through an extracellular matrix that represents the basement membrane of blood vessels. This allows researchers to also assess the proteolytic capacities of the cells.

Migration and the invasion assays are highly sensitive, reproducible, and can be performed quickly. Recently, they have been used to analyze the influence of renal endothelial cells in diabetic nephropathy (Grutzmacher et al, 2013), the role of retinal endothelium in ocular disease (Bharadwaj, et al., 2013), and the interplay between cancer cells and endothelial cells in pathological tumor invasiveness (Mierke, et al., 2011).

“Two very important factors to consider when working with HUVECs are the passage number and the coating,” says Dr. Rezaei. Since extracellular matrix proteins can directly influence cellular functions in HUVECs, it is very important to assess whether and which type of coating should be used in your experiments. “If you do not put any coating in the flow assay, for example, the cells will be swept away and die. And you have to check how long you can keep the cells in culture, because adding the same factor at different phases could result in different responses.”

For tumors to grow, blood vessels have to be remodeled. Cancer cells themselves release growth factors, and physical interactions between the tumor and the endothelium stimulate endothelial cells to differentiate and remodel, as shown by Chiew et al. (2015) in a hepatocellular carcinoma model. Similar findings are described by Dr. Rezaei, who works with a breast cancer / HUVECs co-culture model. “The physical contact between cancer cells and HUVECs is essential to induce cancer cells’ proliferation,” she explains. “In the interactions between endothelial cells and the tumor cells, membrane proteins such as cadherins are important, because they can be the first physical contact between the cells.” Downregulating the expression of cadherins results in a decrease in the number of breast cancer cells transmigrating through a tight HUVECs monolayer.

“Co-culturing also has a big impact on cancer cell proliferation. Putting HUVECs and breast cancer cells together results in an extreme upregulation in the proliferation of cancer cells,” she adds. These findings could also apply to other cancer types, and new therapeutic strategies could target tumor cells and endothelial cells at the same time.

HUVECs give scientists essential insights into the fascinating world of the vasculature. A better understanding of pathological changes within this vital infrastructure would bring scientists one step closer to developing significant therapeutic approaches for a range of diseases. 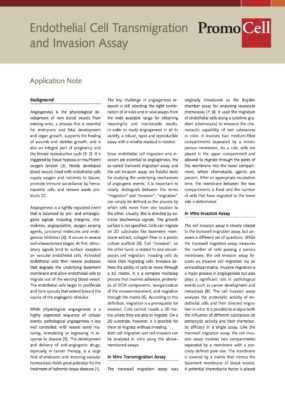 Study Migration and Invasion of HUVEC in vitro

What seems basic to cell culturing is pure stress for primary cells: thawing, subcultivation and freezing. Even seasoned scientists tend to overlook this aspect, and manipulate their cultures less carefully than they should. Unhealthy, or even dead cells are the sad consequence. Here, you can benefit from an expert’s tips in handling primary cells,…