From bench to bedside and back: This is the direction of malignant mesothelioma research. Yet to understand the biology of this particular type of cancer, more basic insights are still needed. And translating that knowledge into new therapies is extremely important, as only limited therapeutic options exist so far.

Using human mesothelial cells from different donors, a group of researchers around Haining Yang analyzed the effect that asbestos has on various types of cells (Yang et al., 2010). Asbestos is cytotoxic, but this feature does not explain carcinogenesis, which requires exactly the opposite, namely unlimited survival of malignant cells. The researchers found an alternative explanation: inflammation. The death of mesothelial cells leads to macrophage recruitment and the secretion of cytokines such as TNF alpha, which results in survival of mesothelial cells and chronic inflammation. “Of course, no one in the scientific community can say with certainty that every case of mesothelioma ever was caused by asbestos, but the majority of cases do seem to involve it,“ explains Dr. Katy Moncivais, scientific advisor at ConsumerSafety.org. The organization provides legal support, with a special focus on medical issues.

Other known factors that influence the onset of mesothelioma are viral infections, genetic risk factors and radiation (Carbone et al., 2012). “In recent years, the percentage of cases without identifiable asbestos exposure has increased,” Moncivais says. “However, the academic community seems to lean toward a belief that many of these cases do involve asbestos exposure. But questions that would help to identify the source of exposure were not asked when recording the medical history of the patients.“

Mesothelioma researchers operate on two fronts: On one hand, the heterogeneous nature of malignant mesothelioma demands continuous basic research to understand underlying pathological mechanisms. On the other hand, affected patients need treatments now. Scientists attribute roughly 38,000 deaths per year worldwide to mesothelioma (Odgerel et al., 2017). Often the tool of choice for bridging the gap between basic insights and – even personalized – therapies is cell culture. A group of researchers recently published a method for deriving tumor organoids from mesothelioma patients. This allows them to investigate in vitro which therapeutic approach is most effective for each specific disease (Mazzocchi et al., 2018). This is of particular importance, as “mesothelioma doesn’t always express useful cell surface markers. It can appear like many other cancers and it is an extremely heterogeneous tumor,” explains Moncivais.

One approach that makes use of this heterogeneity is developing a therapy that aims specifically at the tumor using the patient’s own immune system. “The immune system is so much more powerful and specific than our blunt treatments like chemo and radiation. They’re kind of like using a hammer to beat down a door – instead of just using the key to open it,“ says Moncivais. To turn a specific therapy into reality, T cells from a patient are isolated, transferred to a cell culture and engineered to specifically attack malignant cells (June et al., 2018). The approach is known as chimeric-antigen-receptor (CAR) T cell therapy. Identifying the molecular marker that the therapy is aiming at, is the key to this approach (Klampatsa et al., 2017).

A promising target could be mesothelin, a cell-surface glycoprotein that is overexpressed on malignant mesothelioma cells. A phase I clinical trial with 12 patients at the Memorial Sloan Kettering Cancer Center has shown initial success when giving each patient one dose of CAR-T cells that target the mesothelin of their mesothelioma. However, mesothelin is no magic bullet. “It’s not highly overexpressed in all mesothelioma subtypes. So, it may be a great target for some patients and a useless one in others,” says Moncivais. She notes that another promising target is fibroblast activating protein (FAP), a candidate for CAR-T cell therapy, and which is on the list of potential molecules published by a group of American researchers (Kiesgen et al., 2017). Even though the optimal molecular markers are still under investigation, Moncivais is quite sure about the most promising therapeutic approach for the future: “My money is definitely on CAR-T cell therapy.“

As more and more researchers investigate the opportunities of CAR-T cell therapy – the number of publications on PubMed has risen from 373 in 2008 to 858 in 2018 – large-scale production of those cells is becoming more important. Levine and his colleagues reviewed various approaches and challenges of manufacturing (Levine et al., 2016). They conclude that deep knowledge of processes and strict adherence to clinical manufacturing practices are extremely important when culturing cells of a patient in vitro and preparing them for reinfusion as a CAR-T cell therapeutic.

Re-establishing the in vivo conditions in vitro is essential for generating knowledge about malignant mesothelioma. This is the issue facing several cancer therapies. Scientists aim to find new active substances that are effective not only in 2D cell culture settings, but also in 3D experiments, which are closer to the conditions in the patient. Gwendolyn Cramer and her team of researchers addressed this issue by developing a 3D malignant pleural mesothelioma model (Cramer et al., 2018). They combined different cell lines with various approaches for generating 3D cultures. Using GFR-Matrigel, the researchers succeeded at growing 3D structures with different cell lines, which led to different phenotypes within the 3D structure. Finally, the researchers used the model to assess the effect of two combined therapeutic interventions, namely photodynamic therapy and EGFR-inhibition. The combination of both approaches led to an increased cytotoxicity, as confirmed by their findings.

Researchers around Andrea Mazzocchi went one step further by developing individual tumor organoids from two mesothelioma patients (Mazzocchi et al., 2018). They extracted the tumor cells from the obtained tissue and transferred them into a microfluidic device. Using their 3D tumor constructs, they screened several chemotherapeutics and identified a non-standard component to be effective for therapy due to a particular mutation of the patient. This platform technology could, of course, be extended to therapeutic options other than chemotherapy, as well as to other types of cancer.

For cancer therapies, stratification of different subgroups of patients or personalized treatments could become a game-changer. “Mesothelioma is highly heterogeneous, as are many other types of cancers,” adds Moncivais. That is why individualized therapy is getting more and more attention. To lower the number of patients with malignant mesothelioma, and to improve the outcomes, a combination of measures can be taken – such as profiling and diagnosing patients at an early disease stage, identifying the best therapeutic option, as well as preventing exposure to carcinogenic compounds, in particular to asbestos (Rossini et al., 2018). However, a lot of groundwork remains to be done. For carrying out new studies, and for individualizing patient therapy, cell culture remains a powerful tool. Moncivais summarizes: “Cell culture is paramount, and inextricable, from the success of this field.“ 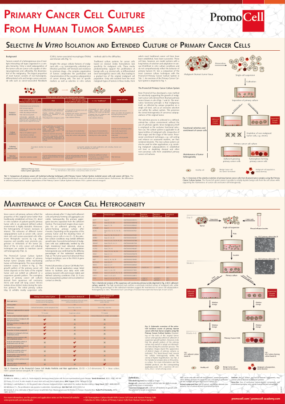 Self-destruction of the body: Cancer turns normal body cells into their malignant counterpart that wants to keep on replicating by any means. Understanding the individual disease offers the potential for more effective therapies with fewer side effects. The new PromoCell Primary Cancer Culture System allows researchers to generate high-fidelity in vitro models of primary tumors….