The genetic code is the blueprint of an organism written on a stable molecule class: deoxyribonucleic acid. With the method CRISPR/Cas9, editing the genetic information has become much easier. This technique is a blessing for basic scientists, as well as for translational researchers such as Dr. Kathleen Börner, who wants to develop a gene therapy for infections caused by human immunodeficiency virus (HIV).

The widespread adoption and easy application have made CRISPR/Cas9 – roughly five years down the road – a game changer. Such an invention translates into prestige and money when it comes to patent registration and commercialization, which is the flipside of the coin regarding the revolutionary discovery of Charpentier and Doudna. Since they published their first paper describing the method of CRISPR/Cas9 and its application in bacteria, there has been an ongoing fight with the research group around Feng Zhang from the Broad Institute in Boston who was first to publish a paper describing the application of the technique in eukaryotes (Ledford, 2017). Despite the fight on patent issues CRISPR/Cas9 remains a revolutionary innovation and a gushing well of new insights.

MEANING: Clustered Regularly Interspaced Short Palindromic Repeats (CRISPR) that encode a guide RNA to identify a specific DNA sequence. The CRISPR-associated (Cas) protein acts as an endonuclease
ORIGIN: Bacterial adaptive defense mechanism against viral infections and bacteriophages
HISTORY: First publication on the use of this mechanism as a molecular tool in 2012
SCOPE: CRISPR/Cas holds great potential for gene editing because it cuts specific DNA sequences, it is easy to use and can be adapted quickly to different DNA sequences. It is even possible to multiplex the reaction and target more than one gene sequence at a time.
APPLICATIONS: From basic research to gene therapy for patients with hereditary diseases 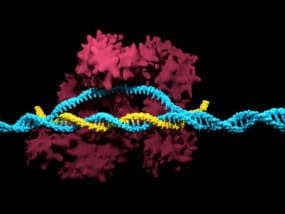 PromoFectin-CRISPR is a new transfection reagent for optimal delivery of RNP complexes for genome editing experiments.

Contact us to try our new PromoFectin-CRISPR with a 50% trial discount!

Many rules in biology exist, and even more exceptions to these rules. For years, immunologists have tried to classify macrophages into two subtypes, classically activated M1, and alternatively activated M2 macrophages. However, with the growing number of activated macrophage subtypes needing description, established nomenclature falls short. Researchers are seeking an alternative to the traditional black-and-white principle….