Crossing the border between medical and biomechanical research fuels the research of stem cell specialist Dr. Diego Correa. We talked to the Colombian-born stem cell scientist, a former clinician with training in mechanical engineering, about his studies with mesenchymal stem cells and their potential clinical applications in cell-based therapy. Soon Correa is going to publish what he believes will be his most important contribution to this field.

While looking at a petri dish filled with growing mesenchymal stem cells (MSCs), Dr. Diego Correa tilts his head and smiles, almost fondly. “Their exceptional dynamism and adaptability is absolutely fascinating to me,” says Correa, Assistant Professor at the Department of Orthopedics (Division of Sports Medicine) and the Diabetes Research Institute and Cell Transplant Center – University of Miami, Miller School of Medicine. The multipotency and variety of the MSC-derived cell types match Correa’s own diversity in his approach to performing research. “Biologists, clinicians, engineers, mathematicians, physicists, philosophers, and business developers all provide different, yet complementary, perspectives on the challenges of medicine,” he says. That is why it took him a while to find his own professional home, which ended up being a “hybrid” of scientific approaches.

Diego Correa, born in Colombia, trained as MD at the Javeriana University in Bogotá, began his medical career at a hospital in the city, with an initial focus on musculoskeletal conditions. He summarizes his experience there: “After some time,  I still had several questions that clinical work wasn’t helping me answer, so I decided to study the skeletal system from an engineer’s point of view to complement the medical perspective. Then, following my master’s degree in mechanical engineering, I came back to clinical work for a while, applying what I learned from engineers into orthopedic daily issues. Later, fueled by the realization of a research passion, I shifted my focus completely into research.” Correa accepted a full scholarship for a Ph.D. program in Cellular and Molecular Physiology at Yale University in Connecticut, U.S. There, again, he worked on the skeletal system, yet this time, from the perspective of basic research identifying genes that control skeletal development. By then, he found research so inspiring that it was impossible for him to return to clinical work.

For Correa, research means, “Think outside the box!” He gets his best ideas when he tries to connect concepts acquired from different disciplines, such as medicine, biology, and engineering. This means working in an interdisciplinary mode, by interacting with other experts and through various cooperative projects. Once he’d decided that his future would lie in research, he applied for a postdoctoral position in Professor Arnold Caplan’s lab at the Department of Biology – Case Western Reserve University, a private research university in Cleveland, Ohio. Correa had heard Caplan present several times, and had always admired him and his research on MSCs. “Not only is he a true innovator who acknowledges himself when he’s right, but also accepts it when he is wrong – even going back to the drawing board, which I think is a very good balance for a successful scientist,” Correa says. “Caplan is still an idol for me, and I now consider him more than a mentor.” Working alongside Caplan, Correa studied MSCs – with the aim of advancing stem cell-based therapy and tissue engineering approaches for skeletal conditions.

Correa thoroughly endorses the concepts of regenerative medicine: “Stem cell therapy is a therapy of the present, not of the future.” But he believes that present therapies still have to become standardized, be more specific and consequently more reproducible. “We now know that there are several functional subtypes of MSCs in our in vitro cell preparations – and what we want to learn now is what they actually do in vivo,” Correa says. For instance, a percentage of the 50 million MSCs that are injected into a knee with osteoarthritis may be just bystanders, added to the ones that actually die after injection. “So we want to find out which cells really are the functional ones during tissue repair and how these relate to in vivo characteristics. This would allow us to use them discretionally, depending on the clinical situation. Discovering what the mechanisms are by which these cells fulfill their medical activities, and how they interact with the environment and communicate with each other, would help make cell-based therapies reproducible and potentially standardized procedures.” For this purpose, Correa and his team are attempting to identify cell signatures based on molecular and functional identities, and to uncover ways MSCs exert their medicinal effects including cell-cell interactions via secreted exosomes containing factors, microRNAs and other signaling molecules. “And we know that all these molecules have therapeutic properties related to tissue injury and repair,” Correa says. Perhaps such techniques will help patients and even professional athletes one day.

Inspired by soccer and astrophysics

Correa’s enthusiasm for athletics goes beyond injury repair. German soccer, particularly his favorite team FC Bayern München, also interests Correa, but so do astrophysics and physics. From deep thinkers such as Stephan Hawking, to Michio Kaku, an American theoretical physicist who has helped to popularize science, Correa gathers new insights about life, about mankind as a species and how to formulate important questions. However, his personal universe revolves around his research focus. “A short time ago, for example, I realized something completely unexpected – that a species’ evolution could be ‘recapitulated’ in vitro through the growth and expansion of adult stem cells in a petri dish, where common ancestry, speciation, and natural selection indeed happens,” he says. Correa used this approach to help him write a new grant centered on the characterization of MSCs with similar origins yet distinct functions. “You can only get this kind of inspiration when you leave your comfort zone.” Along those lines, he points to the ongoing interesting debate between science and religion (“facts vs. faith”) – and how they both try to address similar questions with totally different tools and outcomes.

The search for different points of view seems to drive all of Correa’s investigations. “The MSC: An Injury Drugstore” was the title of his 2011 publication – which received over 800 citations – that Correa published jointly with his mentor, Arnold Caplan in Cell Stem Cell. There, the two stem cell researchers presented a brand new perspective on MSCs. They suggested that MSCs are not only multipotent progenitors and an important source for regeneration, but that once they find an injured tissue, they also display cellular activities as immunomodulators and trophic effectors, now collectively called “medicinal.” After localizing the site of injury, MSCs secrete growth factors and cytokines that locally control the primary reaction of the immune system. Yet the cells also regulate trophic activity, which means they initiate angiogenic, anti-scarring, mitotic, and anti-apoptotic reactions.

“My best contribution to this field”

MSC’s environmental responses (phenotypic, cellular and molecular) is the topic of Correa’s next paper. Soon his new results are going to be published. “Despite previous contributions, I would dare to say that this will be my best contribution to this field,” he says. But he does not want to reveal any details just yet. The only thing he wants to say about it is, “Now we know exactly which of the MSCs located in the bone marrow are the ones that do the job of immunomodulation, and how to induce and maintain those attributes during ex vivo manipulation.” Correa and his team detected the final phenotypic identity of these cells. They found a set of markers (some previously unknown to be expressed in MSCs) that potentially identify sets of cells with specific previous in vivo identities and distinct medicinal profiles, including evidence of MSCs potentially belonging directly to the immune system.

Using both in vitro and in vivo models, Correa’s laboratory is investigating potential applications of stem cell therapy for musculoskeletal, inflammatory and degenerative diseases, accompanied by a recently sparked passion for their use during islet cell transplantation in type 1 diabetes. “But we know that it may be possible to use cell-based therapies to treat many more patients with different types of conditions – for instance, degenerative diseases, inflammatory and auto-immune based diseases – as well as ischemic conditions. Furthermore, the field of organ and cell transplantation is starting to see benefits from concomitant cell-based therapies.”

That’s why Correa also runs a consulting service firm called Lumos Biomed Consulting, LLC helping companies navigate the areas of regenerative medicine and stem cell-based therapies. He provides his clients a scientific foundation that they can use to design, execute, report, and analyze pre-clinical studies and clinical trials, as well as to make strategic business decisions. He often participates in the incubation and evaluation of start-up companies, and also lectures regularly at medical meetings, and speaks at national and international scientific conferences.

Through networking and sharing knowledge, Correa does his part to support scientific progress. When he discovered PromoCell and its serum reduced MSC Growth Medium 2, he was so happy with the results that he wanted to continue the collaboration. “With PromoCell medium, we found that we could maintain in vitro the special phenotype, the cell signature, of MSCs we had found and further induced – without them vanishing upon further expansion – and that these cells were exerting their job profoundly well.” In addition, the rapid cell culture growth rate in PromoCell media was a big plus for Correa. “This is not only important for doing research, but also for standardizing protocols. In this way, we can improve clinical outcomes after cell infusion, injection, and transplantation.“ This is one of many therapy goals that prompt him to leave his comfort zone again and again. 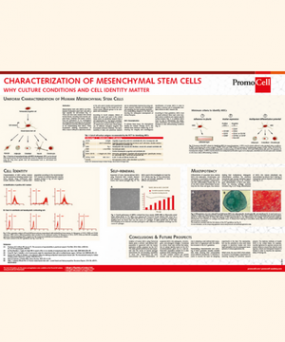