In the human body, two-dimensional structures do not exist. Cells are never present as single-cell entities, but are always surrounded by other cells, forming three-dimensional tissues and organs. In addition, they are embedded in a complex non-cellular structure known as the extracellular matrix. When considering this physiology, it is perhaps surprising that until the mid-90s, two-dimensional models were used in cell culture to analyze tumor cells. In 1996, Reynolds and colleagues showed that undifferentiated neural cells could be grown in suspension as neurospheres. Since then, numerous three-dimensional tumorsphere assays have been established, and tumorsphere cultivation is now widely used to study cancer cells, as well as to screen potential anticancer agents (Lee et al., 2015).

Insights from such experiments are more translatable to conditions in patients than results from the conventional two-dimensional monolayer approach. Cells in three-dimensional culture also differ considerably in morphology, proliferation rate, differentiation, apoptosis and gene expression from adherent cells. In fact, cells that are capable of shaping tumorspheres build a “home” for cancer cells, and, in particular, for cancer stem cells (CSCs).

A tumor consists of various cell types. The most dangerous cells are cancer stem cells, as they are suspected of leading to metastasis and recurrence after treatment. View our poster, and find out how to cultivate such cells with a more physiological culture model in vitro.

About twenty years ago, cancer stem cells were first described by researchers, who discovered that only a subset of leukemia cells could initiate this disease (Bonnet et al., 1997). Since then, this field of research has grown, and CSCs have been identified in various types of solid tumors, including those in the brain, breast, colon, head and neck, liver and lung (Lee et al., 2015). Now CSCs are considered to be the primary cause of cancer recurrence, as they are highly resistant to current chemotherapy and radiotherapy regimens. This is why they represent a key target for successful cancer treatment (Maccali, et al., 2015), and their elimination could lead to permanent remissions, or could potentially even cure the disease.

The greatest obstacle to studying cancer stem cells is the isolation and culture of sufficient numbers of cells. Characterization is also difficult, as CSCs are a highly heterogeneous cell population lacking specific markers. Solving these issues is the aim of the team led by Dr. Matilde E. Lleonart at Vall d’Hebron Research Institute (VHIR) in Barcelona, Spain. “At the moment, there are no specific markers for CSCs, so scientists routinely use the general characteristics that apply to all stem cells. We want to identify unique features that will help to better characterize CSCs,” she explains.

“Our work involves creating in vitro models that resemble the in vivo situation as closely as possible. This allows us to study the molecular and phenotypical changes of CSCs under different conditions.” The team is using three-dimensional tumorsphere cultivation to enrich CSCs from bulk cancer cells. They are isolating and studying stem cells from breast, lung, and head and neck cancer, to better understand the cells’ implications in tumor biology.

Do it yourself: Establishing 3D tumor cell cultures

Three-dimensional models also provide valuable insights into the interactions between host and tumor. Researchers can better investigate the tumor microenvironment, which plays a significant role in cancer progression (Nath et al., 2016). Tumorsphere cultivation is based on culturing cancer cells onto an ultralow attachment surface in serum-free media (Lee et al., 2015). Researchers can use this technique mainly for two purposes, namely either for enriching cancer stem cells or for isolating primary cells from human tumor samples and maintain the cancer cell heterogeneity. Both approaches use the advantage of the 3D structures to build up a more physiological microenvironment.

“We establish 3D tumor cell cultures from renal cell carcinoma patients. This allows us to better understand the features of tumor-infiltrating lymphocytes (TILs) and their role in anticancer immunity,” she explains. “For our studies, it is important that the lymphocytes maintain the same properties in vitro they have in vivo. When cultured, TILs tend to alter their phenotypical characteristics, as they are no longer conditioned by the cancer cells. Yet tumorspheres perfectly resemble the tumor environment, thus maintaining the original tumor properties while offering the best surroundings for the TILs.”

The PromoCell Primary Cancer Culture System offers a defined and animal component-free system for the isolation and culture of human primary tumor cells. “It was difficult to keep tumorspheroids in culture for longer periods of time with ‘home-made’ conditioned media, but we encountered no problems when using the PromoCell system. Here we could culture tumorspheroids from tumor cell lines, as well as from patients’ samples, for as long as three months,” remarks Schnappinger. Her experience is summarized in the blog article about the new culture system that selectively supports the long-term growth of malignant cells derived from primary tumor tissues in vitro.

Although using three-dimensional cultivation presents significant advantages, working with tumorspheres can be tricky when using fresh primary cells or tissues. “Compared to monolayer cultures, it is sometimes difficult to find the right moment for splitting the spheroids. You need lots of experience. If you do this too late, the cells will start dying,” Schnappinger adds. Similar observations are reported by Lleonart: “It is more difficult to establish 3D cultures than monolayers, although it is somewhat easier when you are working with cell lines. When working with primary cells, the size of the biopsies is crucial.

If the samples are too small, it is almost impossible to establish tumorspheres, as they usually contain lots of debris.” Both scientists obtained significantly better results with the PromoCell 3D Tumorsphere Medium XF and the Primary Cancer Culture System. “Phenotypically, we could not observe any differences between cells cultured with home-made media and cells cultured with the PromoCell Media. However, when we analyzed the expression of stem cells’ genes, the purity of the cancer stem cell population was higher when working with the 3D Tumorsphere Medium XF,” explains Lleonart.

In conclusion, three-dimensional-tumorspheres build a “home” for cancer cells that are enriching and expanding tumor cells. Using 3D cultivation gives researchers new insights into cancer biology, and tumorspheres provide important resources for cancer studies. In a world where personalized therapy is becoming a realistic option for many cancer patients, tumorspheres could be precious resources for evaluating the efficacy of treatments prior to their use in patients (Cao et al., 2014). By investigating cancer cells in a biologically relevant in vitro model, researchers will better understand cancer, which ultimately could lead to new therapies. 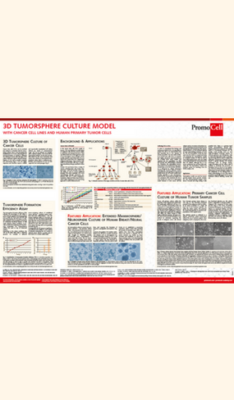 A tumor consists of various cell types. The most dangerous cells are cancer stem cells, as they are suspected of leading to metastasis and recurrence after treatment.

View our poster, and find out how to cultivate such cells with a more physiological culture model in vitro.