Adipocytes do more than simply store fat. They also play a role in metabolic diseases. Through better understanding of how adipose cells function and interact, researchers can develop new, targeted therapies for treating adipositas and diabetes. 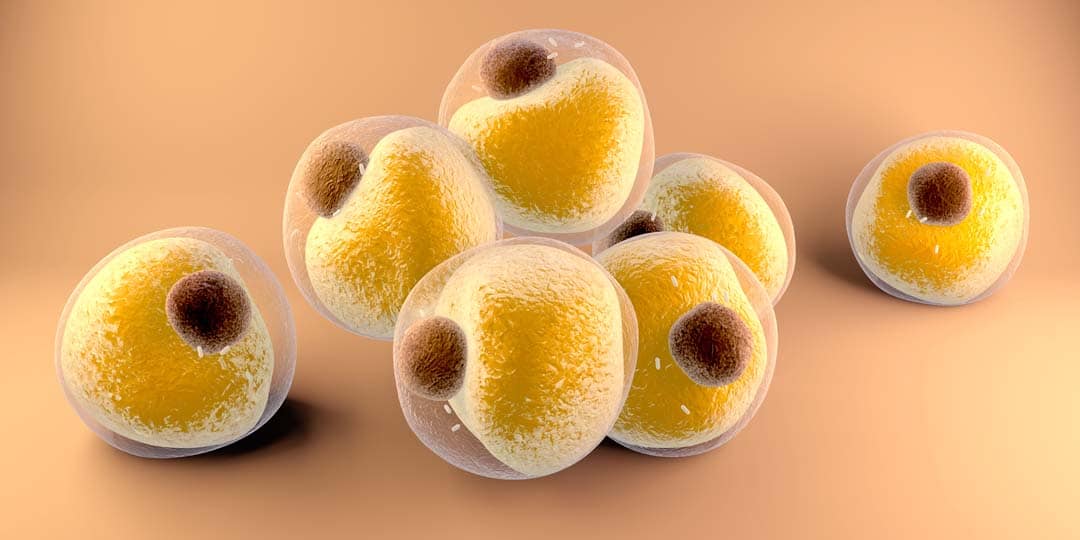 Our bodies and the bodies of all living organisms work like batteries: we get energy from food, light, or other sources and store it. When needed, we convert energy in adenosine triphosphate (ATP) molecules, the primary energy-carriers, which are then recycled about 500 times a day, just like rechargeable batteries. We owe this discovery to the British scientist and later Nobel-laureate Peter Mitchell, who formulated the chemiosmotic theory in the early 1960s. At that time, many scientists rejected Mitchell’s theory. Today, however, it is universally accepted that ATP molecules transfer biological energy to the mitochondria, the “powerhouses” of the cells. These small cytoplasmatic organelles carry out metabolic processes that maintain the health of cells and tissues. Since Mitchell’s discovery, many scientists have investigated the processes that keep life going. However, many questions remain. For example, which role do mitochondria play exactly in the metabolism of adipose tissue, and do fat cells contribute to the development of metabolic diseases such as adipositas and diabetes?

Acting as an energy bank, storing and releasing energy is just one role of the highly dynamic adipose tissue. Adipocytes, mature fat cells, also produce and secrete hormones, which influence energy intake. Moreover, some adipocytes can convert chemical energy in heat. Adipocytes are not the only components of adipose tissue, which is also made of connective tissue and other cells such as preadipocytes, macrophages, fibroblasts, endothelial cells and stem cells. These cells work together to maintain adipocyte integrity and hormonal balance.

Different types of adipose tissue perform different functions. In humans, three types of adipose depots exist, mainly found under the skin and inside the abdomen: white, brown, and beige or brite adipose tissue. White adipocytes are quite large spherical cells with few mitochondria and a single lipid droplet. They store excess calories in form of triglycerides to be used in case of energy shortage. White adipocyte tissue also has endocrine functions and releases hormones such as leptin, adiponectin, fatty acids, and TNF-α that regulate nutrient homeostasis, food intake, inflammation, cardiovascular activity, and tissue regeneration (Medina-Gómez, 2016). The main role of brown adipocytes is building a natural defense against hypothermia by burning fatty acids to maintain body temperature. Until the past decade, researchers thought brown adipose tissue was only active in infants and young children, and that it later transformed into white adipocyte tissue with aging. However, PET scans have identified biologically active brown adipocytes in various locations under the skin in the supraclavicular region and around blood vessels and solid organs in adults (Sacks and Symonds, 2013). Brown adipocytes are smaller than white ones, contain many mitochondria and several small lipid droplets. Scientists are investigating how beige/brite adipocytes develop and how they interact with other fat cells. In the resting phase, they resemble white adipocytes, but upon cold stimulation, they acquire a phenotype similar to that of brown adipocytes along with the thermogenic capacities of such cells (Sidossis and Kajimura, 2015).

Even if they have specific characteristics, the different types of adipose tissue are complementary in their functions. They work together in a fine-tuned cooperation to maintain metabolic balance. But what happens when this balance becomes unstable? Recent studies have shown that when the protective function of brown adipose tissue against metabolic diseases is disrupted, diseases such as type 2 diabetes mellitus and adipositas can result. Also, excess white adipose tissue increases the risk factor of heart diseases and heart failure.

Trying to identify the link between adipositas and insulin resistance

“Adipose tissue contains many molecules that are involved in processes necessary for maintaining metabolic balance. This is why it plays a crucial role in the onset of metabolic diseases,” explains Melissa Olekson, scientific support specialist at PromoCell. Today obesity presents a global health epidemic. It is linked to high-mortality diseases such as type 2 diabetes mellitus and cardiovascular pathologies. Every year, obesity becomes more widespread. Recent studies suggest that 18% of men and 21% of women globally will be classified as obese by 2025, with more than 300 million people suffering from obesity-associated type 2 diabetes (Noncommunicable Disease Risk Factor Collaboration, 2016). Based on this alarming forecast, researchers are striving to better characterize the molecular mechanisms that link adipose tissue with metabolic disorders. Obesity results when energy intake surpasses energy expenditure and also depends on the interaction of many factors including genetics, epigenetics, environment and lifestyle (Schwartz et al., 2017). This explains why, unlike most endocrine diseases, researchers still struggle to understand the underlying disease mechanisms. Despite decades of research and considerable investment, effective therapies are still lacking.

In the case of “healthy” weight gain, white adipose tissue expands by changing the size of mature adipocytes and by recruiting and differentiating pluripotent mesenchymal stem cells. In “unhealthy” obesity, white adipose tissue is dysfunctional and cannot expand properly to store the excess energy. Fat is then deposited in tissues of the liver, muscles, heart, and other visceral organs, which leads to local inflammation. This so called “lipotoxicity” can then induce insulin resistance and increase the risk for type 2 diabetes and cardiovascular diseases (Longo et al., 2019).

When adipose tissue expands rapidly, it can cause cell death, hypoxia and mechanical stress. These signals promote macrophage infiltration that lead to an inflammatory response. In fact, when analyzing the adipose tissue in obese patients, researchers found that up to 40% of cells are macrophages (Weisberg et al., 2003). Chronic low-grade inflammation impairs the function of adipose tissue, hindering adipogenesis and reducing insulin sensitivity. The activation of the immune system in the organs involved in energy homeostasis creates the link between obesity and insulin resistance.

A crucial component of preadipocyte media

Ciglitazone is a synthetic agent belonging to the thiazolidinedione class of antidiabetic agents. It is an essential component in PromoCell Preadipocyte Differentiation Medium and is necessary for the differentiation of preadipocytes into mature adipocytes. Ciglitazone binds the peroxisome proliferator-activated receptor (PPAR)-gamma, activating the transcription factor PPAR-gamma. This factor is involved in the regulation of adipogenesis and lipid storage and influences lipid metabolism and thermogenesis (Ma et al., 2018).

Increasing evidence suggests that mitochondria influence the onset and progression of obesity and related pathologies. Damages to the mitochondrial respiratory chain compromise adipocyte differentiation (Cedikova et al., 2016). Based on this knowledge, scientists continue to seek deeper understanding of the molecular mechanisms responsible for adipose tissue dysfunction. This will enable them to develop targeted treatments so that patients no longer suffer the negative metabolic consequences of obesity.

Preadipocytes: peeking into the development of metabolic diseases

To characterize molecular pathways of metabolic diseases and identify new treatment modalities, relevant in vitro models are needed. “Preadipocytes offer a very useful cell model. They not only provide insights in key human signaling pathways, but also offer a platform to test possible treatments in vitro,” explains Olekson. Scientists can use preadipocytes to investigate physiological and pathological mechanisms controlling the function and differentiation of adipose tissue. “The techniques used in these studies include modification of gene expression and analysis of cell markers,” says Olekson. “Preadipocytes can also be used as a cell model for diabetes studies or for observing adipogenic differentiation of mesenchymal stem cells.” For example, researchers can compare preadipocytes from diabetic patients with preadipocytes from healthy donors to detect differences in intracellular processes, gene expression and cytokine release.

By investigating interactions between healthy and immune cells, scientists gain insights in the chronic inflammatory processes underlying adipositas-associated type 2 diabetes. In a recent study, Kongsuphol and colleagues co-cultured adipose tissue with immune cells in a microfluidic-based in vitro model. As this allows the measurement of cytokines and provides data on inflammatory reactions and insulin sensitivity, this model could be used for screening diabetic drugs.

Similar to these researchers, scientists around the globe are striving to understand the complexity of our “rechargeable batteries.” In their search for new methods to fight obesity, they seek insights in the extreme plasticity of adipose tissue.

Welcome offer - are you working with human white preadipocytes?

We love to see new researchers on our site.
And to thank you for checking us out we’d love to provide you a nice offer. Buy one vial of Human White Preadipocytes (HWP) isolated from adult subcutaneous tissue and get another vial for free.