Real-time tracking of stem cells during cell culture experiments can provide fundamental new insights into their biology. Yet stem cells are very sensitive to experiment-induced stress, and the use of labeling agents or intense light can damage them. With holotomography technology, long-term 3D live-cell imaging of stem cells under physiological conditions is possible – without the use of exogenous dyes and with no phototoxicity.

Today’s stem cell scientists are facing an ongoing dilemma: Every experiment could bring fundamental breakthroughs, but certain assays can also seriously damage – or even kill – the cells. Dr. Mathieu Frechin, Head of Quantitative Biology at Nanolive SA describes the risk. “Putting your cells under a light sheet microscope, which is currently considered the gold standard, is like putting your cells under the sun at noon at the equator. They get sunburned,” says Frechin. In fact, one of the biggest challenges in modern stem cell biology is live-cell imaging in 3D to understand the role of stem cells in tissue maintenance and repair (Park et al., 2016).

Live imaging of stem cells is crucial to understand key processes such as growth, migration, and differentiation. Long-time observation of single cells in cell culture is needed to understand complex cell responses, which would be missed by single-cell snapshot analysis (Skylaki et al., 2016). However, stem cells are very sensitive to experiment-induced stress and manipulation. Fluorescent imaging is the current method of choice for the live monitoring of cell populations or specific proteins over time. Yet it has some major limitations, as the presence of fluorescent tags can disturb biological processes, interfere with cellular proteins, or disrupt the cellular environment. Photosensitive molecules inside cells can also generate radicals that perturb cellular functions and cell viability (Stockley et al., 2017).

During fluorescent live-cell imaging, the laser or LED beams that are used to excite fluorophores can hit and damage the cells, as the long-term exposure of high intensity light pulses causes phototoxicity. In order to limit these phototoxic effects and protect the cells, researchers are sometimes forced to use a lower intensity of light and to accept a lower resolution. “Phototoxicity limits the temporal resolution, that is, the frequency of acquisition of images and, as a consequence, the length of the movie,” remarks Frechin. “Stem cells are sensitive cells, and fluorescence microscopy is not the best method to follow them over a long period of time – specifically if you need a good temporal resolution.“ This is why great effort has been put into the development of new label-free microscopy techniques that allow imaging of living stem cells without having to add exogenous agents that could damage them.

Holotomography: a new technique for exploring the insides of living cells

Reconstructing 3D images from scattered field data on light diffraction has been the aim of several studies (Fercher et al., 1979, Lauer, 2002), however, the optical diffraction limit has often prevented scientists from observing fine cellular dynamics. In 2007, the physicist Yann Cotte and the team of Prof. Christian Depeursinge at the Laboratory of Microsystems of École Polytechnique Fédérale de Lausanne (EPFL) further improved the tomographic microscopy technique by introducing a new method of determining quantitative optical properties of unstained living cells beyond the optical diffraction limit. Holograms, three-dimensional images formed by the interference of light beams on a sample, are captured by a digital camera, put together by a computer and “deconvoluted” to eliminate noise. This laser-based imaging method, which uses holograms from different illumination directions on the same sample, is called holotomography (Cotte et al., 2013).

Low-power green lasers measure the physical properties, the refractive index, of each cell organelle, and allow the dynamic observation of cellular structures. The result are three-dimensional real-time images of unstained living cells at a nanoscale (Frechin et al., 2015, Ali et al., 2016). “The concept is pretty simple,” explains Frechin. “You use light, and the way the light phase is shifted by a biological sample, to then reconstitute what is called a hologram. Laser light is divided into two beams, one reference laser beam that does not pass through the sample, and one beam that passes through the sample and is affected by the physical properties of the sample. Both beams are then combined on a mirror, and their interaction is used for determining the density of the sample. This allows us to reconstitute a refractive index image of the sample, and to calculate the size and shape of different structures in the sample. Holograms are acquired at 360 degrees all over the sample and transformed in actual 3D images.”

The main advantage of holotomography is the possibility of working without any fluorophores, thus not interfering with delicate cellular dynamics. All cell compartments can be monitored at every second during life cycle processes such as growth, division and death. The laser beams are not intense, as the technology works with 100-times less power than light sheet microscopy. Cells remain in their physiological state and almost no phototoxicity inhibits them.

Live-cell imaging can bring very valuable insights into the world of stem cells and other sensitive cells such as neurons and immune cells, allowing the discovery of new processes without interfering with their natural physiology (Sandoz et al., 2018). “The possible applications of holotomography are numerous. Basically, it is up to the imagination of cell biologists,” says Frechin. “Everything that moves in the cell is a potential target for the microscope. Very fine dynamics of organelles, lipid droplets, or the nuclear membrane can be observed.

For example, in cancer cells, several cell-death pathways involving cellular organelles are deregulated, which allows the cells to escape both physiological and therapeutic interventions.” Holotomography could allow researchers to follow changes in the apoptotic pathway of cancer cells and eventually find new targets for treatment (Ubah et al., 2014). The monitoring of the energy metabolism and mitochondrial dynamics in stem cells can also give new insights into key processes of stem cell maintenance and differentiation. As mitochondria are very sensitive to phototoxic stress, holotomography represents the method of choice for visualizing changes in their complex dynamics at high resolution and over a long period of time (Licharova et al., 2018).

Live imaging of cells in vitro is not only key for better understanding biological processes of proliferation, death, differentiation, and migration, but also for identifying new therapeutic targets and monitoring cell reactions to drugs (Gatfield et al., 2017). As holotomography can provide quantitative information on cell volume, surface area, mass, and protein concentration (Ali et al., 2016, Kim et al., 2015), it can be used to show the effects of drugs, on these parameters (Jiang and Sun, 2013). Observing and even measuring single cells or cell-cell interactions is especially relevant in preclinical in vitro studies to assess tumor cell viability under chemotherapy (Zhikhoreva et al., 2018, Jaworski et al., 2019). Following the intracellular dynamics in real-time could ultimately help in developing new therapeutic approaches that bring long-term benefits to patients.

“Holotomography can open new avenues for researchers. There are so many unanswered questions and so many potential discoveries to make. The big challenge is to decide on how to best use this technology in a scientifically precise way to get new data,” concludes Frechin. When scientists can observe stem cells in real time without interfering with the intracellular and intercellular dynamics nor damaging their sensitive homeostasis, they can generate new insights into the complex mechanisms of life, because the conditions of experiments more closely resemble physiological conditions. 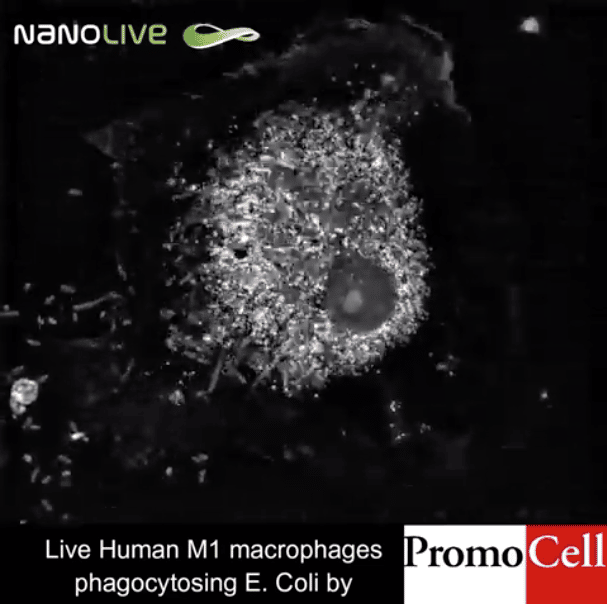 Be amazed by the holotomographic video of our M1 macrophages.

The extremely detailed presentation of human M1 macrophages in a 2D cell culture shows the phagocytosis of E.coli bacteria and corresponding nucleus movement.

It adapts quickly to the cellular defense mechanisms of the host and develops resistance against antiviral drugs: The influenza A virus is a major human pathogen with high variability. New super-resolution microscopy methods, as well as the use of human primary cells, currently allow better insights into the interactions between viruses and host cells….

Crossing the border between medical and biomechanical research fuels the research of stem cell specialist Dr. Diego Correa. We talked to the Colombian-born stem cell scientist, a former clinician with training in mechanical engineering, about his studies with mesenchymal stem cells and their potential clinical applications in cell-based therapy. Soon Correa is going to publish what he believes will be his most important contribution to this field….