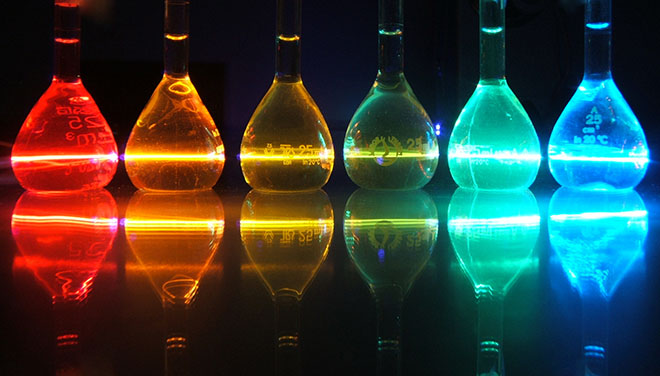 Fluorescent labeling is the process of binding fluorescent dyes to functional groups contained in biomolecules so that they can be visualized by fluorescence imaging (nature.com). The availability of new fluorophores has dramatically changed the possibilities for the sensitive detection of biomolecules and the analysis of their interactions. Improved fluorescent dyes are now enabling previously impossible studies of cellular structures and cellular processes. Fluorescent labels offer many advantages, as they are highly sensitive even at low concentrations, are stable over long periods of time, and do not interfere with the function of the target molecules. The targeted imaging of labeled cells enables tracking them in vitro and in vivo. Using different fluorophores in the same sample can also allow the simultaneous observation of several molecules at the same time. The most commonly used fluorophores are Fluorescein IsoThioCyanate (FITC), derivatives of rhodamine (TRITC), coumarin and cyanine. These synthetic organic dyes are used to label biomolecules as proteins, peptides, antibodies, nucleic acids, bacteria or yeast. Naturally occurring fluorochromes, such as Green Fluorescent Protein (GFP), can also be used to label living cells genetically.

Fluorescence-based assays rely on the ability of fluorophores to re-emit light after the exposure to light particles or photons. The difference in wave length between excitation light and emission light, the so-called Stokes shift, can be detected in microscopes and imaging-systems. Each fluorophore has a specific Stokes shift. Different assays allow researchers to localize biomolecules, to observe them in real-time, to investigate their interactions and to study enzymatic activities.

The kinetic observation of cellular processes using time-lapse fluorescence microscopy has become a fundamental technique in cell biology, as live-cell imaging can provide very valuable insights into cellular growth and transport mechanisms. One major challenge in time-lapse microscopy is minimizing phototoxic effects resulting from photobleaching. The light exposure progressively destroys fluorescent molecules leading to a reduction of the fluorescence signal and to the formation of free radicals which can damage the cells. Therefore, it is crucial for the method of live-cell imaging to find a balance between reducing light exposure as much as possible and getting useful signals to observe the cells. Scientists also need to create a physiological environment which allow to closely replicate the in vivo dynamics. (Ettinger and Wittmann T, 2014).

Our PromoFluor dyes are cost-effective alternatives to well-known, leading fluorophores and span the wavelengths spectrum from blue to far red. They show an outstanding fluorescence intensity and photostability, a strong light absorption, high fluorescence quantum yield and good water solubility and can be used for fluorescence microscopy, fluorescent in situ hybridization (FISH), fluorescence correlation spectroscopy (FCS) and microarrays (protein, DNA). Some of them offer an extra large Stokes shift, which makes them ideally suited for multicolor labeling or flow cytometry applications. PromoFluor dyes are available e.g. as NHS esters, maleimides and amino-modified labels ready for covalent coupling or as conjugates with biotin, phalloidin and deoxynucleotides (dUTPs). Moreover, we also provide high-quality Protein & Antibody Labeling Kits with different PromoFluor dyes.